“I would want to commend all of us at the executive because in the end we delivered this as a team, and it is a reflection of our collective effort,” said Dr Harris at the meeting held on Wednesday April 4 at the Marriott Resort. “I want especially to thank the chairman (Mr Warren Thompson) because a lot of the burden that I took last year he took this year and I think he did an impressive job.”

The Peoples Labour Party, one of the three parties in the ruling Team Unity Administration, held its second Annual National Convention on Saturday March 24 at the Patsy Allers Playing field in West Basseterre. It was the largest such political gathering in the history of the Federation, with over 700 participants.

“It was an outstanding convention from all reports,” said the PLP National Political Leader, and Prime Minister Dr Harris. “Commendations continue to come in from all sections of the national community – it was an awesome event.”

Dr Harris further noted it was a learning experience for the Peoples Labour Party’s new executive, whereby the executive had done well.

“We have to ensure that at all times we set a very high standard high,” advised Dr Harris. “Even if we do not achieve perfection we can still do an outstanding job as we have done.”

The Political Leader explained that from the various inputs there were things to learn and he noted that the convention was a serious exercise, as it is the most important public event for a political party and one that provides an opportunity for the party to showcase its readiness for prime time leadership of government.

He also praised the PLP Secretariat which came together to ensure that the convention went on well, and even after the convention the centre is still a source of activity.

The meeting was chaired by the PLP National Chairman, Mr Warren Thompson, who specifically thanked National Secretary Ms Myrtilla Williams for being available all hours to get things done, the different committees for doing a wonderful job, and those from the constituencies who ensured that they brought delegates. He noted: “What we intended to do came off, and it was done well.”

Peoples Labour Party’s Deputy National Political Leader the Hon Akilah Byron-Nisbett expressed to the PLP’s National Executive body: “You have all been an asset to the planning and execution of our convention. I would add that this convention was more successful than it was last year and I am certain that with this much enthusiasm and effort exhibited from the executive there is no doubt that we are moving forward as a party.”

The Hon Byron-Nisbett, who is also the PLP Constituency Number Three Branch Executive Chairperson thanked members of her executive who worked tirelessly to ensure that everything was in place for the convention which was the second to be held in a community within St. Kitts, following last year’s PLP National Convention that was held in Tabernacle Village.

“As we move forward, more attention need to be placed on developing our Youth and Women’s Arms and efforts will be made to ensure that the proper support is provided in this regard,” promised Senator the Hon Byron-Nisbett. “We must have a vibrant youth arm and women’s arm, as these two groupings are the backbone of any organisation.” 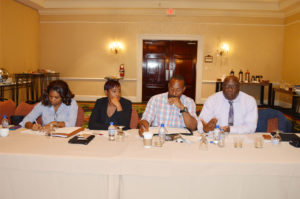 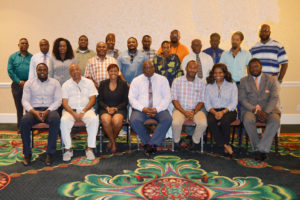 2: Members of the Peoples Labour Party National Executive pose for a group picture.