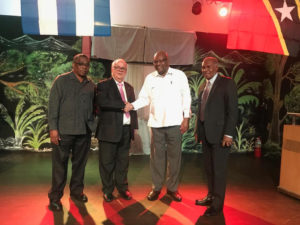 On Thursday, December 27, at the Chilysh Restaurant at Port Zante, His Excellency the Governor General, Sir S. W. Tapley Seaton, along with Senior Minister, the Honourable Vance Amory, the Honourable Ian “Patches” Liburd, Permanent Secretary in the Ministry of Foreign Affairs, Kaye Bass, Charge d’affaires of the Embassy of the Bolivarian Republic of Venezuela, Mr. Jose Antonio Olavarria and other invited guests joined Resident Ambassador of the Republic of Cuba, His Excellency Abelardo Fabio Hernández Ferrer, for the special occasion.

“I want to thank you for having us here this evening to celebrate with you. It is an important milestone and we can only say that we trust that your country will continue to be strengthened, prosper, and that with that prosperity you will continue to lend a hand of friendship to all the other countries within the region,” he said, while calling for the lifting of the US economic blockade against the Spanish speaking Caribbean country.

Senior Minister Amory further commended Cuba for the “immense help which your country has given over the years to help us with the development of our own people through scholarships, opportunities to train and to learn professions, and also with one objective in mind, which is to return to serve our country.”

He also added that the Federation has benefited tremendously from the support given especially in the medical field and said that, “we recognize and want to thank you for the assistance you’ve given to your medical brigade serving here in St. Kitts and Nevis. I think our people have benefited in very significant ways.”

In his address to the gathering, Ambassador Hernandez said “the 60th anniversary of the Revolution ended with the victory of the independence struggles that the Father of the Nation, Carlos Manuel de Céspedes, initiated by giving his slaves freedom to fight for Cuban independence from the colonialist yoke and concluded with the entry into Havana of the triumphant Rebel Army led by Commander in Chief Fidel Castro.”

“From that moment on, deep social transformations began to take place in the country and in a few short years Cuban society managed to eradicate illiteracy, improve health indicators and guarantee land to the farmers and work for the workers,” he said.

“The transformations have continued to perfect the social work undertaken by the revolutionary government and at this time there is a new generation that gives continuity to the revolutionary work. For this purpose, the draft constitution that is in accordance with the social changes that are operating in the country is undergoing popular debate,” the Cuban Ambassador added.

The Republic of Cuba and the Federation of St. Kitts and Nevis established diplomatic ties on May 10, 1995.
Ambassador Hernandez said Cuba “appreciates its excellent bilateral relations with Saint Kitts and Nevis and does everything possible to continue developing the friendly ties between both countries.”

“Our countries had very similar economies based on sugar production. Cuba decided to bet on the development of tourism like St. Kitts and Nevis. The human capital that we have formed in recent years has allowed us to diversify our economy and now we offer the possibility of promoting the development of human capital by establishing a mutually advantageous south-south cooperation with St. Kitts and Nevis,” he highlighted.

More than 100 specialists in St. Kitts and Nevis have studied in Cuba in the field of health, as well as engineers and teachers.

“The relationships have allowed us to collaborate bilaterally and in international organizations, to advance our respective development agendas, while meeting the sustainable development goals agreed upon at the United Nations. We agree on points of vital importance such as those related to climate change and the mitigation of its effects,” Ambassador Hernandez said, while pinpointing that “since 1995, there is a medical brigade at both hospitals in St. Kitts and Nevis that works with local doctors and nurses, many of them graduates in Cuba.”

“Thanks to the regional integration of our countries, we face common problems and move towards a better future for our peoples. We thank the friends present who have agreed to celebrate such an important anniversary for the Cuban people,” he added.