(CNN)Seven-time Super Bowl champion Tom Brady officially announced his retirement from the NFL on Tuesday.The 44-year-old, arguably the greatest NFL quarterback of all time, announced the news on social media.

Read Tom Brady’s retirement announcement“I have always believed the sport of football is an ‘all-in’ proposition — if a 100% competitive commitment isn’t there, you won’t succeed, and success is what I love so much about our game,” he said.

“There is a physical, mental and emotional challenge EVERY single day that has allowed me to maximize my highest potential. And I have tried my very best these past 22 years. There are no shortcuts to success on the field or in life. This is difficult for me to write, but here it goes: I am not going to make that competitive commitment anymore.

“I have loved my NFL career, and now it is time to focus my time and energy on other things that require my attention. I’ve done a lot of reflecting the past week and have asked myself difficult questions. And I am so proud of what we have achieved.”My teammates, coaches, fellow competitors, and fans deserve 100% of me, but right now, it’s best I leave the field of play to the next generation of dedicated and committed athletes.” 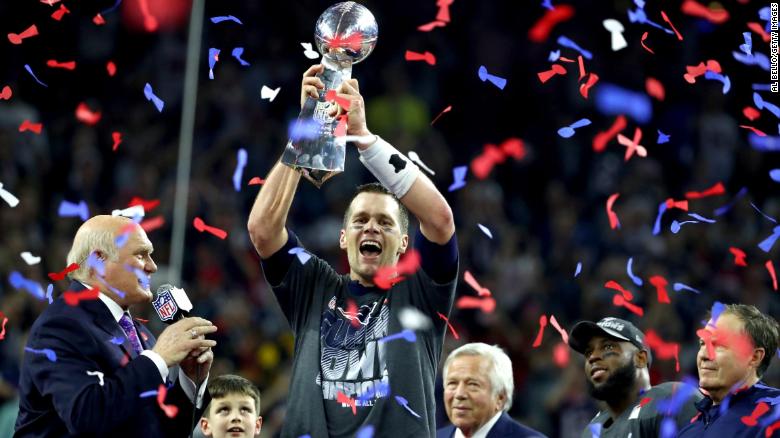 Brady celebrates after the Patriots defeated the Atlanta Falcons 34-28 at Super Bowl 51.Brady has just finished his 22nd season in the NFL — and second with the Tampa Bay Buccaneers.During his 22-year career, Brady has won seven Super Bowl titles — six with the New England Patriots and one with the Tampa Bay Buccaneers — and he retires as the NFL’s all-time leader in passing yards (84,520), touchdown passes (624), completions (7,263), regular season wins (243), playoff wins (35) and Super Bowl MVPs (five). He has also played in and won more regular-season games in his career than any other quarterback.Over the weekend, ESPN’s Adam Schefter and Jeff Darlington and The Boston Globe, had reported that Brady was retiring, citing unnamed sources.But on Sunday, a source familiar with the situation told CNN that “Brady contacted (Tampa Bay) Buccaneers general manager Jason Licht (on Saturday) to inform him he has yet to make a final decision about his future.”But after saying on Monday that he hadn’t made decision on retiring, Brady confirmed the news on Tuesday.

Selected 199th overall in the sixth round of the 2000 NFL draft by the Patriots, Brady played 20 seasons in Foxborough.He left New England as a free agent after the 2020 season and signed with the Bucs where he led the team to a Super Bowl win in his first season there. 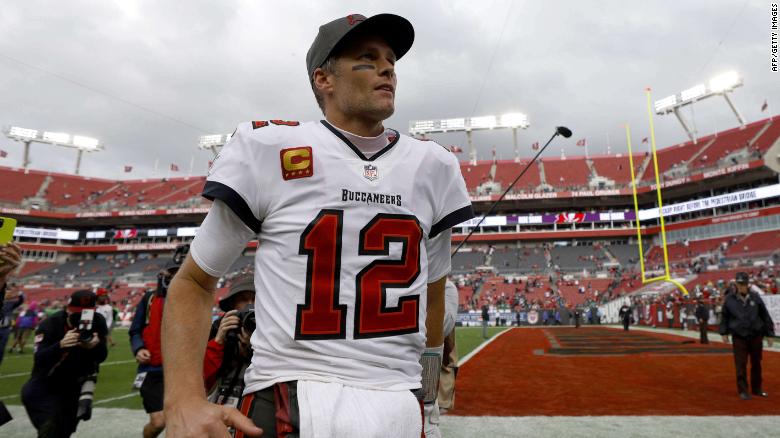 Brady walks off the Raymond James Stadium field after a game.With the Super Bowl win with Tampa Bay, Brady joined Peyton Manning as the only starting quarterbacks in NFL history to win a Super Bowl with multiple teams.Brady is the first quarterback in league history to lead his team to seven Super Bowl wins, surpassing Terry Bradshaw (four) and Joe Montana (four). Brady’s 10 Super Bowl appearances is more than any franchise in the Super Bowl era — the Dallas Cowboys, Denver Broncos and Pittsburgh Steelers each have eight.In his final season, Brady led the league in passing yards (5,316) and touchdowns (43) and earned an NFL-best 15th Pro Bowl selection.Brady was named to the league’s 2000s All-Decade Team, the 2010s All-Decade Team and the NFL’s 100th Anniversary All-Time Team.Patriots owner Robert Kraft paid his respects to Brady’s career, saying in a statement that: “Words cannot describe the feelings I have for Tom Brady, nor adequately express the gratitude my family, the New England Patriots and our fans have for Tom for all he did during his career.”A generation of football fans have grown up knowing only an NFL in which Tom Brady dominated. He retires with nearly every NFL career passing record, yet the only one that ever mattered to him was the team’s win-loss record. In his 20 years as a starter his teams qualified for the playoffs 19 times. He led his teams to 10 Super Bowls, winning an NFL-record seven championships. In a team sport like football, it is rare to see an individual have such a dominant impact on a team’s success.”You didn’t have to be a Patriots fan to respect and appreciate his competitiveness, determination and will to win that fueled his success. As a fan of football, it was a privilege to watch. As a Patriots fan, it was a dream come true.”I have the greatest respect for Tom personally and always will. His humility, coupled with his drive and ambition, truly made him special. I will always feel a close bond to him and will always consider him an extension of my immediate family.”Visit CNN.com/sport for more news, features, and videos

“Tom made everyone around him better and always seemed to rise to the occasion in the biggest moments. His record five Super Bowl MVP awards and seven Super Bowl championships set a standard that players will chase for years.”He inspired fans in New England, Tampa and around the world with one of the greatest careers in NFL history. It has been a privilege to watch him compete and have him in the NFL. We thank him for his many contributions to our game and wish Tom and his family all the best in the future.”