BASSETERRE, ST. KITTS, August 27, 2018 (PLP PR Media Inc.) — Twelve new homeowners from Constituency Number Three (West Basseterre), courtesy of the Unity Housing Solution programme, have been welcomed to the National Housing Corporation (NHC) family with a word of counsel that when there is a problem in the family, it should be resolved in the family.

“As directors, we see you as family,” said NHC Director Mr Wayland Vaughan when he addressed the twelve homeowners at a ceremony held in LaGuerite on Thursday August 23 where they were to receive keys for their new houses. “National Housing Corporation is one big family, and so you are just joining the happy family at NHC.”

Mr Vaughan, who was standing in for Chairman of NHC’s Board of Directors Mr Valentine Lindsay, explained that the family was steadily growing and in it every member has responsibilities.

“I would like educate you on some of your responsibilities in this family,” said Mr Vaughan. “So from here onwards do not come to the association and say ‘all you’. We are a family. When you have a problem, resolve the problem in the family – am I being reasonable? (Those in the audience gave him a resounding ‘yes’) You have now become a member of the family.”

Director Vaughan called upon the new homeowners to pay their mortgages as only in doing so the National Housing Corporation would be in a position to extend the family to another over 3,000 persons who have already applied for a house.

New homeowners were advised by Director Vaughan that while the NHC was giving them houses that were as close to perfect as possible, he stressed the importance of maintaining the houses because if they are not maintained their value would depreciate. He concluded his remarks by saying: “Congratulations again and welcome to the NHC family and we do hope that you, the new members of our family, would really enjoy what we have to offer you.”

Earlier in the week on Tuesday August 21, under the Unity Housing Solution programme, thirty new homeowners from Constituency Number Seven received keys to their houses at a function held at Catholic Street Housing Extension in Molineux. The next key presentation in the Unity Housing Solution programme will be held on Tuesday August 28 at Pine Garden in Central Basseterre. 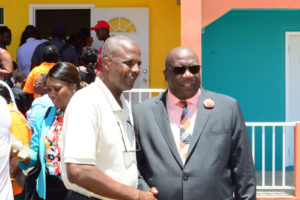 1: NHC Director Mr Wayland Vaughn with Prime Minister Dr the Hon Timothy Harris after 12 new homeowners were presented with keys to their houses. 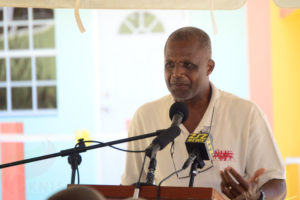 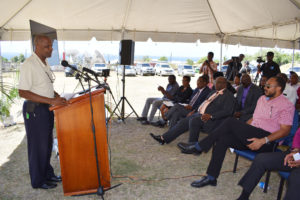 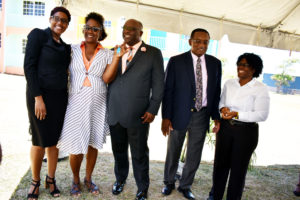 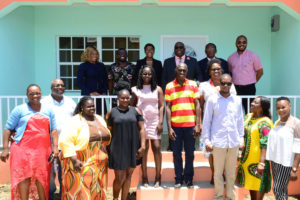 5: New homeowners from Constituency Number Three pose for a group picture with Prime Minister Dr the Hon Timothy Harris and other officials.